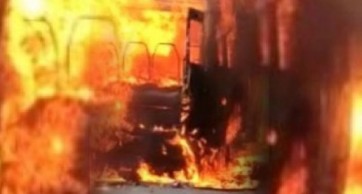 According to the police, the car and tractor parked outside the residence of sarpanch Swaroopa were torched by unidentified persons.

Both the vehicles were gutted in the fire.

Swaroopa, belonging to ruling Telangana Rashtra Samithi (TRS), alleged that it is the handiwork of her rivals.

She said some people who have grudge against her set afire her vehicles.

The sarpanch alleged that she faced threat to her life from her rivals.

The TRS leader lodged a complaint with Bhumpally police station and demanded the immediate arrest of the culprits and stringent punishment to them.

A police officer said they registered a case and took up investigation.