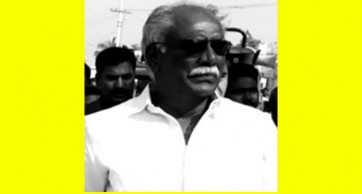 Six of the eight accused in the case were reportedly arrested on the border between Khammam and Mahabubabad districts.

The arrests are likely to be officially announced later in the day.

Tammineni Koteshwara Rao, who is the key accused number also a cousin of the victim, and Krishna Jakkampudi are yet to be arrested.

Krishnaiah (62) was waylaid and brutally murdered by a gang of four assailants at Teldarupalli village of Khammam district on Monday when he was returning home after attending Independence Day celebrations in a nearby village.

The victim's family blamed Koteshwara Rao for the murder. He is the brother of CPI-M state secretary T. Veerabhadram.

Following the murder, Krishnaiah's supporters had attacked the house of Koteshwara Rao. As tension gripped the village, police imposed prohibitory orders under section 144 of the Criminal Procedure Code.

According to police, a rift between the cousins over 2019 election to Mandal Parishad Territorial Constituency (MPTC) at Teldarupalli is suspected to have led to the murder.

In this election which ended the seven-decade-old custom of unanimously electing leaders for local bodies, Krishnaiah's wife Mangathayam had defeated a candidate supported by the CPI-M.

Krishnaiah, who was earlier associated with the CPI-M, later joined TRS along with his wife and other family members. This had annoyed the Communist party leaders who blamed Krishnaiah for the setback in their stronghold.

Meanwhile, the situation remained tense in the village. Over 500 police personnel have been deployed.