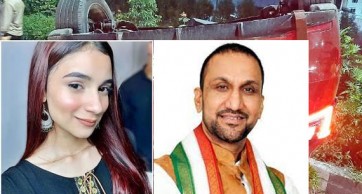 Hyderabad, Aug 1 (IANS) A beautician was killed and two others injured in a road accident in Shamshabad on the outskirts of Hyderabad in the wee hours of Monday.

The accident occurred when the car in which they were travelling overturned after hitting the road divider at Satamrai.

The deceased was identified as Taniya Kakade (25), was daughter of Congress party leader Mohammed Feroz Khan. She was working as a beautician.

According to police, she was returning home from Rajiv Gandhi International Airport (RGIA). Two others travelling with her were injured and they were admitted to a hospital.

The body was shifted to Osmania Hospital mortuary for autopsy.

The car crashed when Mirza Ali who was driving the car lost control over the vehicle and hit the divider. RGIA police registered a case and took up investigation.

Feroz Khan is the incharge of Congress party for Nampally Assembly constituency in Hyderabad. He had contested unsuccessfully for Hyderabad Lok Sabha seat in 2019.