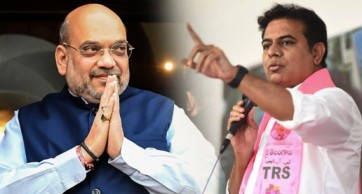 KTR, as Rama Rao is popularly known, asked Shah to respond to his 27 questions on the "injustice being done to Telangana by the BJP".

He said that the BJP is spitting venom on Telangana for the past eight years, adding that the BJP national leaders only know to tour Telangana once in a while and try to spread hatred amongst people here.

Amit Shah is scheduled to address a public meeting at Tukkuguda in Rangareddy district on Saturday.

KTR alleged that BJP did not fulfil a single promise made to Telangana but fulfilled every requirement of states like Gujarat on a war footing.

He also stated that the BJP always insulted the Telangana movement. "We will fight for the rights of the people of Telangana and demand our rightful share under the AP Reorganisation Act," he said.

The TRS leader said the people of Telangana "know the true colors of the BJP which has neither done any good to Telangana nor will change their stand in the future".

He warned the BJP about their "step-motherly attitude" towards Telangana and also stated that people here will give a befitting reply to these unfaithful leaders.

"BJP should tell which of the promises made under AP Reorganization Act to Telangana were fulfilled by them? Is it not true that BJP washed off their hands when TRS leaders demanded the establishment of a Rail Coach Factory in Kazipet?

"Telangana has been the top investment destination for global firms. Yet, Telangana is not being given any industrial incentives. Why? Do you have an answer for it?" KTR asked.

He said that scrapping Information Technology and Investment Region (ITIR project) in Telangana denying the city's rapid development in the IT sector shows how the BJP conspires against Telangana.

"After rejecting ITIR status to Telangana, can you name at least one program introduced by the BJP Govt as an alternative option for the development of the IT sector?

"What answers do you have for the youth of Telangana who lost opportunities in IT companies due to the rejection of ITIR?

Why are you not allocating new Software Technology Parks to Telangana whose IT sector is progressing at a rapid speed?" he posed to Shah.

KTR wanted to know about the funds allocated to Telangana in the past eight years, keeping aside the funds which the state receives constitutionally.

He also asked Shah why the BJP government failed to fulfill election promise to give national status to the Palamuru Rangareddy lift irrigation project.

He also sought a reply on ignoring the suggestion of NITI Aayog on allocating Rs 24,000 crores for projects such as Mission Kakatiya and Mission Bhagiratha in Telangana.

"Isn't it the fact that you are troubling the citizens of Hyderabad by becoming a hurdle in the construction of skyways by not allocating defence lands to the state government," the TRS leader asked.

KTR also asked questions about Centre not extending financial support to the Hyderabad Pharma City, not approving the Defence Industrial Corridor or a single mega powerloom textile cluster for Telangana.

He also wanted to know why the Centre creating hurdles in paddy produced from farmers of Telangana and why it did not set up Turmeric Board in Nizamabad.

"CM KCR demanded the abolition of cess on petrol prices and reducing the prices. Will you make a statement on this during your visit to Telangana?" KTR asked.