Youth hacked to death on busy road in Hyderabad 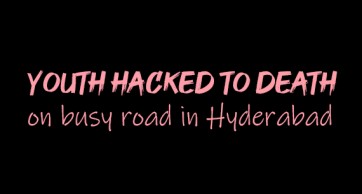 Hyderabad, May 12 (IANS) A youth was hacked to death by unidentified men on a busy road in Hyderabad's Attapur area.

The incident occurred around midnight at Pillar Number 96 of PVNR Expressway under the limits of Langar House Police Station. Assailants armed with knives attacked the victim resulting in his death. They later escaped from the scene.

The deceased was identified as Jehangir (22), a resident of Shaheen Nagar in Chandrayangutta area of the old city.

On receipt of information, police rushed to the scene and shifted the body to government-run Osmania Hospital for autopsy. Investigation team gathered clues from the scene of the offence. Police were also scanning footage from CCTV cameras in the area.

A police officer said they registered a case and took up the investigation. Old enmity is believed to have led to the murder.

Earlier, another man was murdered on Tuesday night. Victim's body was found in the Lalaguda area of Secunderabad. He was identified as Afsar, a resident of Borabanda.

The deceased is said to be an accused in a murder which took place in 2017. He was recently released from jail.

Police suspect that the accused dumped the body in Lalaguda after killing him at some other place.