Not meant to hurt anyone, KTR on remarks about Andhra 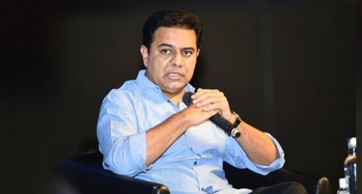 Hyderabad, April 30 (IANS) Telangana Industries and Information Technology Minister K. T. Rama Rao has clarified that his remarks about Andhra Pradesh were not meant to hurt anyone.

"It appears that an innocuous comment that I had made at a meeting may have caused some unintentional pain to my friends in Andhra Pradesh," KTR tweeted.

"I enjoy a great brotherly equation with AP CM Jagan Garu & wish that the state prospers under his leadership," he wrote.

KTR's comments at a property show of the Confederation of Real Estate Developers' Associations of India (CREDAI) in Hyderabad on Friday had evoked strong reaction from several ministers in Andhra Pradesh.

They had condemned KTR for the remarks and asked him to withdraw the same.

While highlighting how the basic infrastructure has significantly improved in Hyderabad over the last seven years, KTR had said people appreciate the value of this when they visit other states.

In an apparent reference to Andhra Pradesh, he said his friend, who went to a neighbouring state to celebrate Sankranti at his native place, shared with him his experience during the stay.

KTR said the friend told him that he stayed in the village for four days, there was no electricity, no drinking water while roads were in bad condition.

"He also suggested that I arrange a few buses and send people from here to the neighbouring state as then only they will realise the value of the work being done by the government in Telangana," said KTR, who is son of Chief Minister K. Chandrasekhar Rao.

"If you feel this is an exaggeration, you may go to the neighbouring state, then only you will appreciate us more," he added.

Andhra Pradesh's Education Minister Botsa Satyanarayana was quick to hit back at KTR.

Botsa Satyanarayana stated that he personally experienced power cuts during his stay in Hyderabad and claimed that he had to use a generator at home.

He said it was not proper on part of a responsible minister to speak like that about a neighbouring state and asked him to withdraw the remarks.